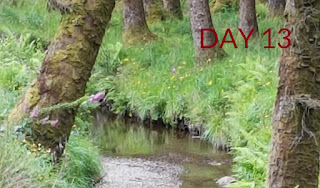 Research on trauma shows that if other people are experiencing the same difficulties, pain or suffering as ourselves it is much easier to bear because we can talk about it, we know that others understand.

But there is a veil hiding it all, our human survival instinct can prompt us to hold on to the belief that we have to fend for ourselves and that nobody cares. However there is a loving providence ready to spoil us. I once tested this with a friend of mine. We wanted to see if the loving providence would take care of us.

We set out on the road without any money, food or plan. Just hitching and sharing our story with people who gave us a lift. I've never eaten as much, the amount of meals we were offered. The convents in Ireland that put us up for the night and the people who opened their doors when we needed a bathroom. Just random knock on a door and we were welcomed, cake was brought out and cups of tea.

Not everyone was welcoming but we just moved on and tried somewhere else, asking for a glass of water, the use of the bathroom. One night we ended up sleeping on the floor of a hospital. Sometimes we found whole packets of food just left somewhere.

I've never been let down when I've trusting in the loving providence. Millions of times in my life it has stepped in and proved life so much more wonderful than I imagined.

It does take that step of fearlessness and trust and being willing to seem foolish by those who only believe in what can be seen. But when we suffer, there is always someone who suffers the same, there is someone somewhere to send good wishes and healing, to journey with. We just can't see them right now.

Posted by Michaela Avlund at 10:46

Michaela Avlund
Welcome to the Happiness Skills blog which is an invite to share your happiness experiences as sharing good experiences increases our health and well-being.