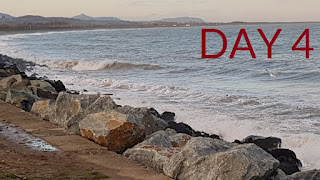 The advantage of a lockdown and not being allowed to go anywhere unless one is an essential or front-line worker is the time one has to look into other people's lives and views. This morning I was deeply moved by a new documentary about Prins Henrik, the recently diseased French husband of Danish Queen Margrethe and the struggle he had to feel at home in Denmark due to the lack of definition of his role.

The footage of the couple is deeply moving from the point of view of their obvious great love for each other. Prince Henrik was a very present father to their two sons. He had dreamt of becoming a pianist but his father hadn't approved and he ended up becoming a diplomat after having served time in the French army.

He seemed to have struggled his whole life with not having a clear identity within the Danish Royalty apart from being the Queen's husband and a father and grand-father. At one point when his oldest son took on the Queen's duties and he himself was 'demoted' he fled to France as he felt humiliated and hurt. However, the Queen and boys followed him and he returned after three weeks.

What is moving in the documentary though is that Henrik little by little starts to enjoy his life more and not care so much about the public perception or his own identity. I am guessing that he discovered that greater, permeating love and goodness within himself and around him that enabled him to say that he was proud that Margrethe and he had a 40 year+ harmonious marriage and that the most important thing in life is to spread joy. That in the end the goal is to make everyone happy. A life well lived is it not?

Posted by Michaela Avlund at 11:31

Michaela Avlund
Welcome to the Happiness Skills blog which is an invite to share your happiness experiences as sharing good experiences increases our health and well-being.